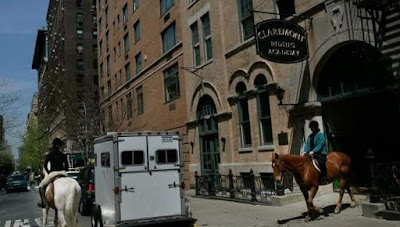 Once a bustling stable yard, the Old Academy stood elegantly amongst the brownstones. The roman brick and columns rose gracefully above its neighbours as yellow cabs swept past the arched doors, unaware of the school's noble past.

In the 19th century, the Old Academy's horse-drawn carriages transported passengers across the city until engine traffic overtook the carriage and the academy turned its attention to mounted riders.

As a student, he learned to befriend the city, the sirens and traffic, the twisting iron carriages and steam flumes. The city horse became his companion. Together they navigated the concrete grid, traversing vibrating sidewalks and zebra crossings, exploring Central Park's looping bridle paths.

Over time, as obstinate dog walkers and vainglorious joggers seized the old wagon paths, the war horse came to be bred outside the city.

The academy left behind its first home and found refuge in Montauk.

Set alight by paradisiacal sunsets, the hamlet reached out into the ocean, its wild meadows forming part of New York's most eastern tip. It was here we learned to taste freedom as readily available as the fragrance of salt and pine.

Unhinging our steeds, we released them to the moors, where they took up grazing next to monuments of bygone days. Some of the earliest ranches took root here, straddling ancient pathways worn down over thousands of years by Montaukett fishermen. Beneath the dunes, bridle paths skirted this end of the world, the sea, an enfolding galaxy.

As winter burned into the windblown hamlet, we pulled the horses in from the moors
and battened down the hatches. Many of the restaurants and cafes would shut up
shop through December while snow ploughs cut paths through the thick blanket that
submerged the surrounding towns.

The train curled around the coastline and under the rolling hills of the ancestral
Paumanok Path, its trail markers pointing ever onwards. Gliding through the
heartland alongside half-timbered houses and villages bearing cryptic names, a
ghostly whistle sliced through the night before we barrelled through a tunnel and
Long Island disappeared from sight.

The city stretched beneath us, a canvas of smudged neon lights slowly dimming to
blackness as the plane climbed into the sky. Suspended between worlds, we flew
ever deeper into the darkness before the first amber rays warmed the sky. Early
risers watched the pale streaks of light cut through the clouds, setting them ablaze.

Stories whistled in the sharp morning breeze. They stung my face as I walked
through crunching puddles. The brook crept along the edge of the grove before
hurdling over limestone rocks. From the mist, the farmyard emerged ghostlike, its
outbuildings dutifully returning to life.

From behind the haggart walls, cows stretched their heads over barn gates tied together with orange twine. The chestnut mare that my grandmother used to say had wild eyes stared back at me from behind the ramshackle half door.